I’m the star, Neil Gaetano. I’m a concert pianist, and I sing well. I’ve go the tenor range to handle pop music, and my looks – coupled with my sexy moves – mean everybody’s looking at me. Just as they should.

Don’t get me wrong, I’m not stuck-up or anything. I deserve all the attention, every bit of it. I worked hard to learn playing as well as I do, and I practice hours every day. Now, as for singing, that was mostly talent I was born with. That and the dancing. I still needed to practice, and the sexy moves are all mine.

In the band, Joe didn’t like me at first, but we worked it out. John doesn’t understand that I need to develop my own brand and advertise it. The rest of the band doesn’t generate the interest, I do. The more attention I get, the more some of that spills over onto the band. Kind of. Anyway, Danny and I are a team, and when the Conservatory and the Band and the Fraternity are all over, we’ll still be together.

Danny’s from Baltimore, I’m from West Virginia (not that I admit it out loud). We met at a party in Baltimore after my senior year of high school, and have been together ever since. I think a few of the guys suspect something, but without proof I’m safe. And, without me there’s no band. I’m the star.

Danny is the band’s manager and doing a great job. We all agree that he’s probably the most valuable member o the band, despite the fact that he doesn’t make music. He finds us well-paying gigs, gets us hotel rooms, gets us a stand for our swag, handles transportation, and basically does everything except playing the music. I want to ask him why he’s happy to stay behind the scenes, but I’m afraid his answer will be something I don’t want to hear. I could never hide my talent back stage, because fans don’t buy tickets to our hotel rooms or the catering. They pay to see me. 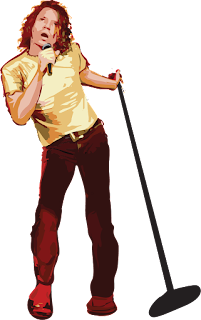