Tommy here again. Next week we’re asking Antoine to be the guest host for those of you more interested in sports than the weekly soap opera of a young married couple. He’s said to be the best player since Michael Jackson, but I don’t know. Sure, he’s guaranteed Rookie of the Year, won tournament MVP in the NCAA three times, was the number one draft pick, set records for almost everything in the ACC. But, I’m better-looking. So there.

Mayor Lightbrain is claiming that she’s listening to scientists about how to handle the virus, and the best thing is to keep everything closed. Scientists agree that little kids can catch COVID, but it’s almost never serious. So, why are they locked up? Reports of child abuse are down, actually a bad sign. Most reports come from teachers, who now haven’t seen students in months. Between her and Governor Einstein I wonder how long the city can last.

We had a record number of patients at the clinic on Saturday. I’m slowly becoming sort of a nurse instead of a physical therapist. I draw blood, take vitals, change dressings. Rick arranged to ship us a used X-Ray machine and supplies, and Deena is finally able to get a look at the lungs she listens to. Logan works all day translating for our Spanish-speaking patients. We’ve got enough protective gear for Deena, Logan and me, but it’s hit or miss for a lot of the rest of the volunteers. Tree figured out how to do a drive-up food bank. About half of the customers walk up, but it’s the same setup. When he said he was going to install a window, management told him he couldn’t because it was too expensive. We have a window, and Tree paid for it himself. A lot of the small businesses where poor people shopped are gone forever, and we could run the food bank 24/7.

Ralph and Becca bought a van converted into a sort of bus. It has fourteen seats and a large cargo area. They found a retired city bus driver who had a mild case of COVID earlier this year and is recovered. His doctor says the driver is now immune with plenty of antibodies. He works all day Saturday picking up patients, food, medical supplies, whatever’s needed. Suhail is a first generation American, his parents came from Jordan. Nice guy.

OK, e-mail time. Ellen D. in New Orleans wants to know what style underwear I want when I appear on her show. She gives guys underwear, something I don’t understand since she’s not into guys. Anyway, I told her briefs. I just got a text from Logan, TMI. Oh, well.

Here’s one from Stefan W. in Dubrovnik. He wants my recipe for cabbage salad. Stefan, just get a cabbage and make a salad. Honestly, some people.

I’ve started the newest series, Frankenbuzz Detective Agency. Their first case will be Sea Monster or Monsters, and take place on board a luxury yacht in the Gulf of Mexico. Let me know your ideas for the kinds of cases you want them to accept, the sorts of characters you’d like them to meet, and where you’d like them to travel.

The joy of fiction is that travel costs are usually zero, so join the young men as they solve crimes all over.

Earliest publication date will be 2021.

Artwork for new book is in

Artwork is in for the second book in the new series, Spring Break Resort: Another Pointless College Story with Lots of Gratuitous Sex. Devastation Resort plays host to a few thousand partiers on Spring Break for a week. The two couples explore likes and dislikes, preferences, and in general have a great time. With lots of gratuitous sex, of course.

Highlights include meeting a man with three elbows, the party boat sinking, a wet T-shirt contest for the ages, and some life-changing decisions. Release on amazon.com is planned for October. 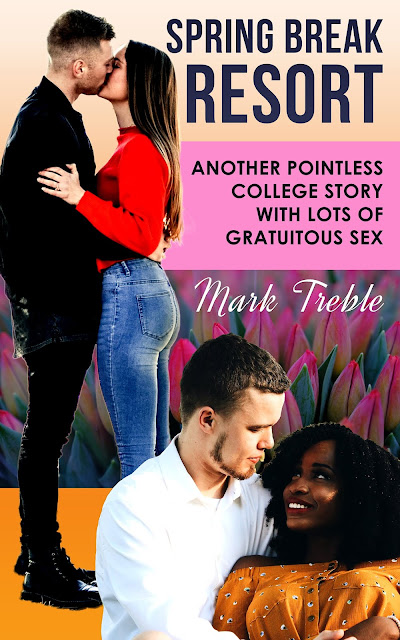