So You Want to Start a Business? is based on nearly forty years of starting businesses, and helping others do the same. There are basics that everybody needs, and help deciding what kind of business to start. You'll learn how to start your own online business selling products, as well as selling products from a physical location. Discover which new businesses are the most successful, the most profitable, and which have the highest failure rate along with the lowest profits. You'll also discover how to navigate starting a new services business.

The End is Near

It seems my writing days are numbered.

I will have brain surgery in January or February to improve a neurological disorder that is incurable. The recent diagnosis explains why I’ve been having so difficult a time completing books. I’m starting a new series, Frankenbuzz: Detectives, Not Mad Scientists. The first book, Sea Monsters, will be co-authored with Samantha Mason. There is no due date yet.

Part four of the Finding Series is partially-written and next on the list. I also want to complete Did You Ever See Allegro? It’s been three years to this point. I’m not certain I have enough time left to finish all three.
Posted by Mark at 3:36 PM No comments:

A publisher has purchased all rights to the Flint Files series, including both Taunting and Harassing. They will no longer be available for sale through either Amazon.com nor marktreble.com.
Posted by Mark at 4:24 PM No comments:

Harassing, volume two of the Flint Files, will be released on Amazon Kindle Thursday, September 13, 2018.


Nobody notices the homeless. Which is why it took so long to realize that homeless women were being abducted in small towns across the South, then returned unharmed and untouched a few days later. They remembered that the kidnappers talked about “Harassing,” but nothing more. A local police investigation sparks a nationwide search for victims and kidnappers. The FBI learns that the abductions have been going on for several years and involve hundreds of homeless women. There's little chance to catch the perpetrators until motive is known. And that's a complete mystery.

Danny Flint and the New Orleans Police High-Profile Crimes Unit are pulled into the investigation and quickly develop leads to other, seemingly unconnected, crimes.  An assassin tries to murder one of Danny's analysts, a mental health counselor vanishes, an Illinois State Senator disappears, and Sheriff's Deputy Caroline Trudeaux is marked for death. How they’re connected might lead to motive, but nothing is apparent.

Follow Danny and his team through the swamps and forests of Louisiana and Mississippi, the deadly corruption of New Orleans politics, an attempted murder of an FBI Agent and the science of forensic anthropology as they try to understand the connections and prevent more disappearances and deaths. Buzz Bakersfield, a young career criminal and lock expert, joins Danny's team as a door-opener - literally. He's kept busy trying to predict the kidnappers' next moves, helping a traumatized friend from his past, and getting to know his new girlfriend. The sex involves sprinkles unless it involves a hearse or maybe a saddle. It's New Orleans, what else would you expect?

The plot twists every other chapter, as the action quickens and becomes more violent. It gets more and more difficult to separate the good guys from the bad ones. Putting the puzzle together involves medical and mechanical sciences, profiling several thousand suspects, multiple precision law enforcement raids, intense analysis and some luck. What is “Harassing.” What’s the motive? And, when it’s over, is it really done? 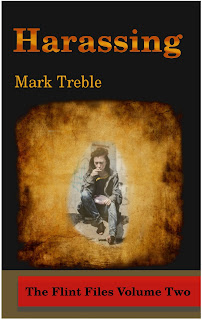