Four Second on the Clock, a story of coming of age and coming up

now have uniform five-star ratings in the Kindle Store at Amazon.com.
Posted by Mark at 10:05 AM No comments:

I've published three books in the last five months, and need to slow down. I find if I try to work to an arbitrary date that quality suffers. Life Continues, the sequel to Life Struggles, will go to editing in April and be published in May. After that I'll send the bromance trilogy, The Finding Series, to editing. I expect that to take some time. I want to publish all three volumes simultaneously, because it's a single story. That probably won't be available in the Kindle Store at Amazon.com until close to the end of the year.

While that's in editing I'll finish the companion novellas, My Very Own Autobiography, written by Emgee. He's a puppy and belongs to Mike, one of the characters in the bromance. His books will be offered free to people who buy the individual books of the trilogy.

I'm chanelling a guy who popped into my head fully-formed. I just write what he tells me. He's already given me the story arc, and is fillilng in the spaces in between the turning points. It's a little difficult, because he forgets to tell me things like "XYZ" dies doesn't come immediately before "ABC turns back up." It seems they're a couple years apart.

It's a completely new genre for me. Men of Carolina is about two men who meet their senior year of college. The narrator, Kyle, is an author. The other man, Adam, is an actor. The book follows them for more than a decade, starting in 2002. Every time Kyle tells me what to write I'm surprised. In two weeks I'm about three quarters through the first draft of a four-hundred page book. To say the least, this is one of the strangest writing experiences of my life.

If Kyle will just shut up, I'll get back to Did You Ever See Allegro?, the story of a college band in 1969-1970. It was good, it was fun, it was unsuccessful. The story is told in vignettes from the past, separated by conversations between the two surviving band members, enroute to the other men's funerals. It's very different, and very personal. When it's done I'll need beta readers. If you're intereted, write to me at mark@marktreble.com
Posted by Mark at 1:32 PM No comments:

The new website is now live! Sign up for the newsletter at www.marktreble.com by April first and receive a free book of your choice from among:

Taunting, a mystery
The Trip to Helen Gawne, a comedy
Life Struggles, a drama
Four Seconds on the Clock, a story of coming of age and coming out.

Unpublished and NOT YET EDITED:

Life Continues, sequel to Life Struggles
Finding Friendship, volume one of a trilogy following a bromance between a straight man and a gay man.

Get a free book!

The new site has a couple of days of testing, then it goes live not later than March 25. Meanwhile, the e-mail is active and I'm responding to messages from readers.

Visit the new site, www.marktreble.com, between March 25 and April 1, sign up for the newsletter, and let me know which free book you would like.

Four Seconds on the Clock, coming of age and coming out.

Life Continues, the sequel to Life Struggles, is scheduled for pubication on KIndle at Amazon.com in May, 2016.

Final Drafts of the three-volume (b)romance should be done this summer. Planned publication is for October, 2016.

Taunting is on Kindle Countdown Deal 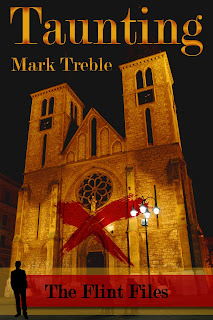 My new author website, www.marktreble.com, will go live on March 25. That is also the date my new email address, mark@marktreble.com, goes live. You will be able to sign up for the newsletter, see all the books at once, browse links to interesting sites and keep up to date with this blog, all from one place.

Most recent contest winners who will have characters named for them in a forthcoming book:

Look for your names in print by the end of the year!

Beta readers of Life Continues have pointed out a variety of weaknesses in the book, and I am following most of their recommendations. Publication is still set for May 2016.

While making the changes it occurred to me: Angst is an easy topic for a writer. Conflict is fascinating, and it's easy to conceptualize and describe. Transformation without constant conflict is much harder to accomplish.

First part of the existing blurb:

That has all been trashed for now. Angst is easy to conceptualize and describe, but I think by now in the Life Stories series it has reached its limits. I'm reconceptualizing the book as a story of evolution and growth. There will still be conflict - can't write fiction without it - but conflict will no longer be central to the story. It will be one of several influences on Ethan's and Alex's continuing growth and evolution. It's hardly a spoiler to say that Ethan and Carly marry. It's hardly another spoiler that Alex improves his ability to relate in a mature manner to those in his life.

Comments on a new story arc, scenes you'd like to see, and events and environments that promote change, are welcome. Right now, the book is a blank slate with some cryptic notes. Readers' participation in the book's development is invited and encouraged.
Posted by Mark at 11:58 AM 2 comments:

Life Continues, the sequel to Life Struggles, is currently in the beta read stage. That will be complete by the end of this month, and the book goes to editing April 1 with a projected early May publication in the Kindle Store at Amazon.com.
Posted by Mark at 11:39 AM No comments: