Four Seconds on the Clock, a five-star-rated drama about two young men dealing with the aftermath of trauma, goes on sale today for $0.99 for four days, then is raised to $1.99 for the following four days. After that, it reverts to its regular price of $2.99. 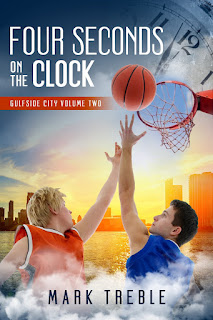 Logan Matthews has it all: good grades, a leading position on the basketball team, a hot girlfriend, a smart best friend, a great part-time job and his own car - and a slam-dunk basketball scholarship to a nationally-ranked university. Everything’s going his way. So, why does life suddenly feel as though everything is spiraling out of control?

A substitute teacher with an agenda is threatening to fail him in an important class. Logan’s hot girlfriend is finally loosening up on the physical relationship side. But Logan’s father has grounded him because he disobeyed Coach’s orders. Even Coach admits it was a great play, but Logan’s father could care less. He wants Logan to dump his girlfriend because her twin brother is gay, and his best friend, Antoine, because he’s black.

Logan’s former best friend, Tommy, is the basketball team captain, and despises Logan. Almost as much as Logan despises Tommy. But, they have to work together or both lose their scholarships. And Coach won’t let up on forcing the issue. Either they put aside their differences or Coach will put aside their scholarships. But putting aside their differences is just not going to happen. There’s too much history and pain to overcome.

Coach knows what the disease is and even its cause. But he has no clue about how to fix it in time for the final games. If forfeiting the state championship would make Logan better, then Coach was willing to do that. The team and its members mean far more to him than a title. But Coach knows that a forfeited title won’t fix Logan. In fact, Coach is struggling with his own demons. He’s fairly certain he not only knows the cause of the disease, but he blames himself for the whole thing.

As Logan pivots his feet on the squeaky gym floor, he’s counting on a desperation play to win the game. And he wonders just how many more desperation plays, on and off the court, will have to succeed to get his life in order. It could all start with winning this game, but can he do it? After all, there are only four seconds left on the clock.
Posted by Mark at 7:29 AM